After a win in Week 13 against the North Western Predators, the Raiders managed a 3 game win streak to finish their 2013 regular season with (7-5) record. The 2013 season has been the Raiders most successful season since 2005. This season, the team scored 342 points For (3rd) and had 290 points Against (5th). 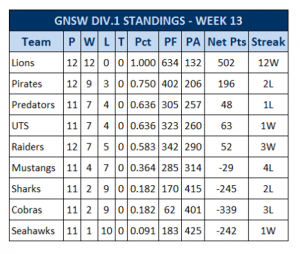 While the Raiders season may be over, the Team’s place in the standings is yet to be decided. Depending on the results of Week 14’s games, the Raiders may stay in their current 5th position – or move as high as equal-3rd and into the Playoffs!