WEEK 7&8: The Raiders came up with two important victories over the weekend after a schedule change last week resulted in back-to-back games over the 2-day period.

Scheduling issues of the week 7 match-up between the Raiders and the Cubs meant that the game was delayed and both teams would re-meet on Saturday, 4 May @ Buff Point Oval. The Raiders won the game 26-18.

After an well earned rest at a nearby caravan park, the Raider returned to Buff Point Oval for their match up against the Central Coast Sharks. After some trouble holding on to the football early in the first half, the Raiders managed to compose themselves and come out with the 36-12 victory over the Sharks.

After securing W’s over the Cubs and Sharks, the Raiders move into the final week of the regular season with a record of (5-2-1), Ranked 2nd on the League Ladder and guaranteed a spot in the Playoffs.

In two games, the Raiders scored a total 62 points and lead the League with 84 Net Points (PtsScored – PtsAllowed). 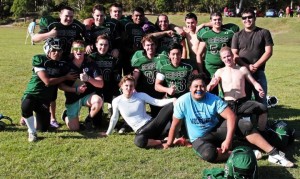