This past weekend, Saturday 11th November  2017 (Remembrance Day), was Round 10 of the Gridiron NSW Season and our men and colts teams travelled over to Melwood Oval – Forestville.  The Raiders women had a BYE week.

Our colts kicked off against the Giants at 11am hoping to keep their finals dream alive. Unfortunately, it was not a great day for the boys. The defence struggled to keep the Giants offence contained and by the end of the first half they had stacked on the points and the score at the break was 26-0. The second half told a similar story with the only score by the Raiders being a Pick 2 by #33 GianLuca Fanuli.  FINAL SCORE – Central West Giants 46 have defeated the UNSW Raiders 2

Our next game of the round was our men who played the Newcastle Kings.  After a minutes silence in honour of Remembrance Day, the game kicked off just after 3pm. 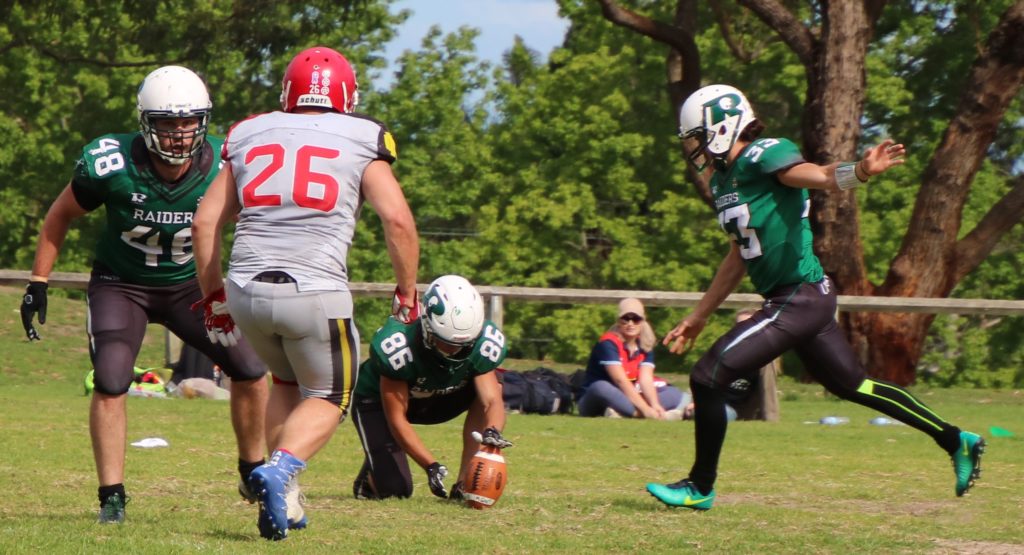 1st and was a rushing TD to #20 Kingsley Dennison which gave the Raiders an early 6-0 lead.  In the 2nd Quarter the Raiders offence unsuccessfully tried to break the Kings defence however points were added with a field goal by #33 Aaron McEvoy taking the score to 9-0 and he didn’t stop there adding a 3rd field goal to the tally before the end of the half and the Raiders led 12 – 0.

The 3rd quarter saw an early Safety to the Raiders taking the score to 14-0 before yet another field goal by the kicker which took the tally to 17-0.  The only score of the 4th quarter was a 4th field goal by #33 Aaron McEvoy.

When  Dan Hawkins (now Head Coach of UC Davis) visited Australia for the 2014 Gridiron Australia Future Stars he said “Don’t underestimate Special Teams… a game can be won or lost on special teams” and that was indeed the case for this match!  Well done to the Raiders defence on holding the Kings scoreless and a huge congratulations to our kicker #33 Aaron McEvoy on his hat-trick of field goals!
FINAL SCORE – UNSW Raiders 20 have defeated the Newcastle Kings 0

Round 10 results from around the league were as follows:

Our next games are on Saturday 17 November 2017 which will be Round 11 of the GNSW Season.  This is also the final round of the regular season.