This weekend the UNSW Raiders travelled to Robert Ziems Park in Corrimal to be hosted by the Wollongong Mustangs and Brumbies.

First up for the UNSW Raiders were our colts who kicked off against the Wollongong Brumbies at 1pm.  The colts did well in the 1st half scoring 2 Touchdowns however went into the half time break down 26-14.  In the 2nd half boys played hard and came back into the match.  Scorers for the afternoon were #1 Paul Kitiona and #20 Jahvia Peters who both scored 2 Touchdowns each.  There is a dispute over the Final Score.  Gridiron NSW has registered the game as a win for the Brumbies 28-26 however after the film was reviewed over the weekend we believe the game was drawn at 26-26.  The standings have been updated as per the recorded loss however the result is currently being contesting and we will keep you updated.  FINAL SCORE – DISPUTED 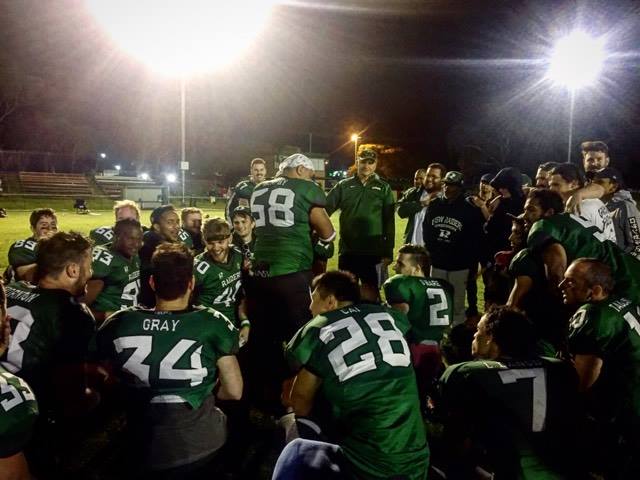 Next, our Men kicked off against the Wollongong Mustangs at 6pm.  The mens team was a little lighter than usual with a number of players either unavailable or injured.  They played hard and the offense started well with the team going into the half time break leading the Mustangs 21-7, the 3rd quarter saw the men increase their lead to 35 – 14.  The Mustangs tried to fight back with one more touchdown in the 4th quarter however it was too little to late with the Raiders finishing the strongly to give them the win.

The results from the weekend give the Raiders a season record of 8-1 and places them in 2nd place on the GNSW league ladder with the final regular season round next week! FINAL SCORE: UNSW Raiders 48  def Wollongong Mustangs 20

UNSW RAIDERS GAMES FOR NEXT WEEKEND (ROUND 11)

This coming Saturday is Round 11 and the final round for the Gridiron NSW regular season.  It is also the UNSW Raiders final home game for 2016 so we hope to a massive crowd to support our teams. Our game schedule for Saturday 12 November 2016 is as follows: