This Saturday, 16th September 2017,  was Round 3 of the Gridiron NSW season.  All of our teams travelled to Sydney University Oval 2 for their matches. 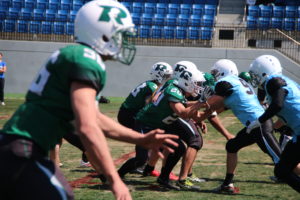 First up were our U19 Colts who kicked off against the Sutherland Seahawks at 10am.  Our young team did well given they were up against the 2 time reigning champions and only trailed them 12-6 at the half with a touchdown being scored by #10 Corey Craig.  In the second half, the Seahawks extended their lead but our boys did their best to fight back.  Congratulations to #17, Tarquin Harrison, who scored the colts second touchdown in his first ever game, however it wasn’t enough and the Seahawks took the win.  FINAL SCORE – Sutherland Seahawks 26 def UNSW Raiders 12 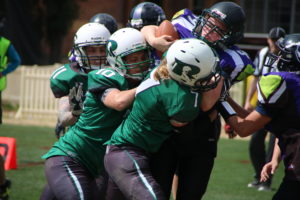 Next, we saw the Women face competition newcomers, Northern Sydney Rebels at 2.00pm. This was a good game with some great hits.  The Rebels came out fighting but the 2 time reigning champions were up for the challenge.  Our ladies struck early and they struck hard going into the half leading 20-0 with touchdowns to #12 Alia Kamali, #47 Emma Furneaux with the 2 point conversion by #12 Alia Kamali, and a touchdown to #43 Renae Hahn.

The second half told a different story with the Rebels showing what they are capable of! They closed the score and came within points of the leaders however in the end our women were too strong with a touchdown to #10 Kirstie Bridge which was converted by # 47 Emma Furneaux they took the win.  FINAL SCORE – UNSW Raiders 28 def  Northern Sydney Rebels 18

Finally our Men kicked off against the Sutherland Seahawks at 4.00pm and what a game it was!  This was tipped as the game of the round and, with both teams looking for their first win of the season, it didn’t disappoint! 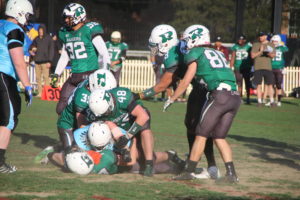 The Raiders started well with the defense holding strong and the boys went into the half time break leading 12-0 with first half touchdowns to #2 Rustum Todd and #10 Lemeki Taumoefolau.  The second half told a different story, with the Seahawks coming out fighting hard!  They scored 3 consecutive touchdowns giving them the lead – the score was  24 – 12 by the end of the 3rd quarter.

It wasn’t until the 4th quarter that the Raiders finally answered the challenge with a touchdown pass thrown by QB #3 Lukas Vojnar to #1 Max Nina which took the score to 24-18, however they were still down.  A late touchdown by #16 Chris Ravlich levelled the score at 24 all, then, in the final 15 seconds of the game #1, Max Nina, kicked a massive field goal to give the Raiders their first win for the 2017 Season.  FINAL SCORE – UNSW Raiders 27 def Sutherland Seahawks 24

UNSW RAIDERS GAMES FOR NEXT WEEKEND (ROUND 4)

On Saturday 23 September 2017 our Colts and Men will travel to Forestville Oval while our Women head over to Neptune Park at Revesby.