This weekend the UNSW Raiders travelled to Speers Point  to be hosted by the Newcastle Cobras Gridiron Club.

Our UNSW Raiders Women were supposed to have kicked off at 1pm however due to low number the Newcastle Cobras women were forced to forfeit giving our ladies a technical “win”.  Our women remain undefeated and on top of the 2016 Gridiron NSW league ladder with a season record of 3-0.

Our Men made the trek to Newcastle and kicked off at 6pm.  It was a hard fought game. The Raiders defense held strong and there was no score at half time.  The second half saw the Raider offense stir with a Touchdown by #99 Christian Gaitau with #1 Max Nina successfully kicking the PAT.  Free safety #11, Moey Musawi, managed 3 intercepts.  The Raiders defense continued to hold strong and kept the Cobras scoreless!

Today’s result means our men remain undefeated and continue their hold of the top position on the 2016 Gridiron NSW league ladder.  Their current season record is 4-0 – the last time we recall the men had such a fantastic start to the season was in 2005! 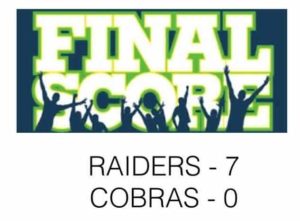 Our Colts team had a bye this week and will take the field again on 8th October.

UNSW RAIDERS GAMES FOR NEXT WEEKEND (Round 6)

This coming weekend the UNSW Raiders will be playing at their home turf – David Phillips. Our game schedule for Saturday 8 October is as follows: