This Saturday 7  October 2017 was Round 5 of the Gridiron NSW Competition and the start of the GNSW October “Pink Month” raising funds and awareness for the McGrath Foundation. 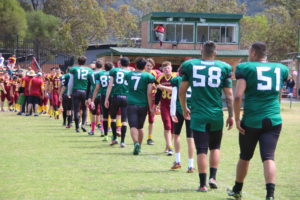 to Forestville to face the Northern Sydney Rebels.  Our Colts and Women both kicked off at 11.00am and our men kicked off at 3pm.

In Corrimal, it was a slow start for the Colts but it ended up being a very close match.  Our offense started to get the gears moving  midway through the first and the score at the end of the half was 8 a piece with a touchdown to #20 Jahvia Peters and the 2 point conversion to #8 Evander Swann.

The second half saw a lot more action with touchdowns by #8 Evander Swann who also ran in the 2 point conversion and a touchdown to #7 Liam Collins.  Our colts are improving week by week – this game was very evenly matched however neither team could manage to pull away enough to take the win and the game ended in a draw. (Photo: Elissa Manera)  FINAL SCORE – UNSW Raiders 22 Wollongong Mustangs 22 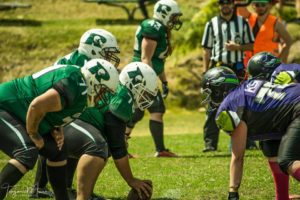 Over at Forestville our Women kicked off against the Rebels and produced their best performance of the season. The women struck hard and fast when #47 Emma Furneaux finished the Raiders first drive with a touchdown which was converted by #53 Madison Helene on her first carry of the season. #3 Liana Hogarth made an impressive return to the Raiders; this time on the defense.  She scored twice on Special Teams with two long returns one which was converted by #43 Renae Hahn.

At the end of the first half the women had a fantastic 32 – 8 lead.  The Offensive Line dominated this week and paved the way for 4 touchdowns on the ground.  The defense did a great job in holding the #2 offense in the league to only 8 points. Match touchdown scorers were:  #80 Evie Lichaa x 1, #15 Alia Karmali x 1, #3 Liana Hogarth x 2 and #47 Emma Furneaux x 2.  The women remain top of the 2017 ladder and are 5-0 this season.   (Photo: TM Photography) FINAL SCORE – UNSW Raiders 46 def Northern Sydney Rebels 8

Our Men kicked off against the Mustangs at 3pm hoping to secure their second win of the season.  They came out firing with a touchdown in the opening play by #25 Rustum Todd  with 1 pt conversion to #1 Max Nina giving the guys a very early  7-0 lead.  The Mustangs answered not long after levelling the sco 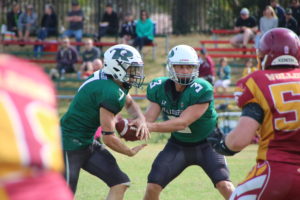 re to 7 a piece but the Raiders struck again with a touchdown to #36 Christian Gaitau and the 1pt conversion to #1 Max Nina – the score was 14-7.  The Mustangs struck 2 more times by the end of the first half and the score going into the break had our men trailing 14-20.

The 3rd quarter saw no score but the action started again in the 4th quarter with a touchdown to #1 Max Nina who also kicked the conversion taking the score to 21-20.  The Mustangs answered and the score was 21-26 – the stress levels grew and the supporters were biting their nails! Quarterback #3 Lukas Vojnar through a touchdown pass to #1 Max Nina who once again kicked through the conversion and the men took the lead again. In the final minute of the game the offense had the ball and our Quarterback took a knee to secure the win which places our men 5th on the ladder with a record of 2-3. (Photo: Elissa Manera) FINAL SCORE – UNSW Raiders 28 def Wollongong Mustangs 26

If you would like to support the PINK ROUNDS and support the McGrath Foundation please go to: https://mcgrathfoundationportal.gofundraise.com.au/page/Gridiron

Our next games are on Saturday 14 October 2017 which will be Round 6 of the GNSW Season and the UNSW Raiders OFFICIAL PINK ROUND.  All our teams were scheduled to play at David Phillips however they have been moved to Neptune Park at Revesby for player safety in regards to the short run off zones at the ends of the field and the proximity of the walls at David Phillips.  We hope to see many of you dressed in Pink to support this round.