This past Saturday was Round 6 of the GNSW Season.  It was also the UNSW Raiders OFFICIAL PINK ROUND and we were very busy raising funds and awareness for the McGrath Foundation! 🏈 💞🎀

Firstly, we would like to thank UTS Gridiron Club for being very accommodating and organising for us to use Neptune Park for our home game (after David Phillips was deemed a safety concern).  We thank them sincerely for supporting our Pink Round, for the use of their BBQ and for allowing us to take the home sideline.

On the Charity Front – Our Pink Number Board Fundraiser sold out and was drawn during the men’s game.  Thank you to everyone who bought a number and congratulations to the following people:

On the day we had a raffle with some fabulous prizes that will be drawn in the coming week.  The BBQ sizzled and we pre-sold t-shirts, singlets, and devoured heaps of cupcakes, slices and treats! A big thank you to Renae Hahn and the women’s team for everything they did for the day and thank you to Madison Helene, Jessica Bestrashniy, Elissa Manera and Tenisha Lawrence who baked all the goodies.

The UNSW Raiders are very proud to announce that we have raised over $3000 that will be shortly deposited in the GNSW McGrath Foundation Donation Page!  If you would like to support the PINK MONTH and donate to the McGrath Foundation please go to: https://mcgrathfoundationportal.gofundraise.com.au/page/Gridiron 🏈 💞🎀 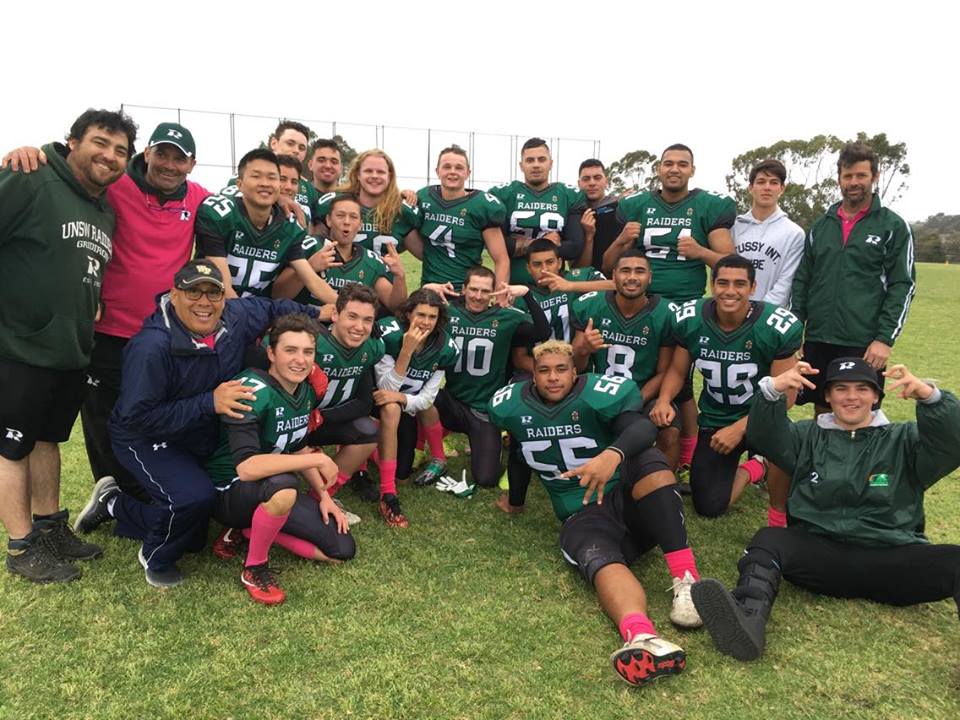 Now onto the business of football…. and what a massive day it was!

It was a very grey day at Neptune Park for our Pink Round which saw our colts kicking off again UTS at 12pm.

The boys were still looking for their first win of the season and they started the game well with first half touchdowns to #4 Kordell Payne and #20 Jahvia Peters giving them a 12-6 lead at the half.

The second half saw the colts continue their momentum.  They were very disciplined in their approach and held off a determined UTS team.  With touchdowns to #17 Malachy Guthrie-Hunt and #4 Kordell Payne our colts were able to knock off the undefeated UTS team and take their first official win of the season!  FINAL SCORE – UNSW Raiders 24 def UTS Gators 20 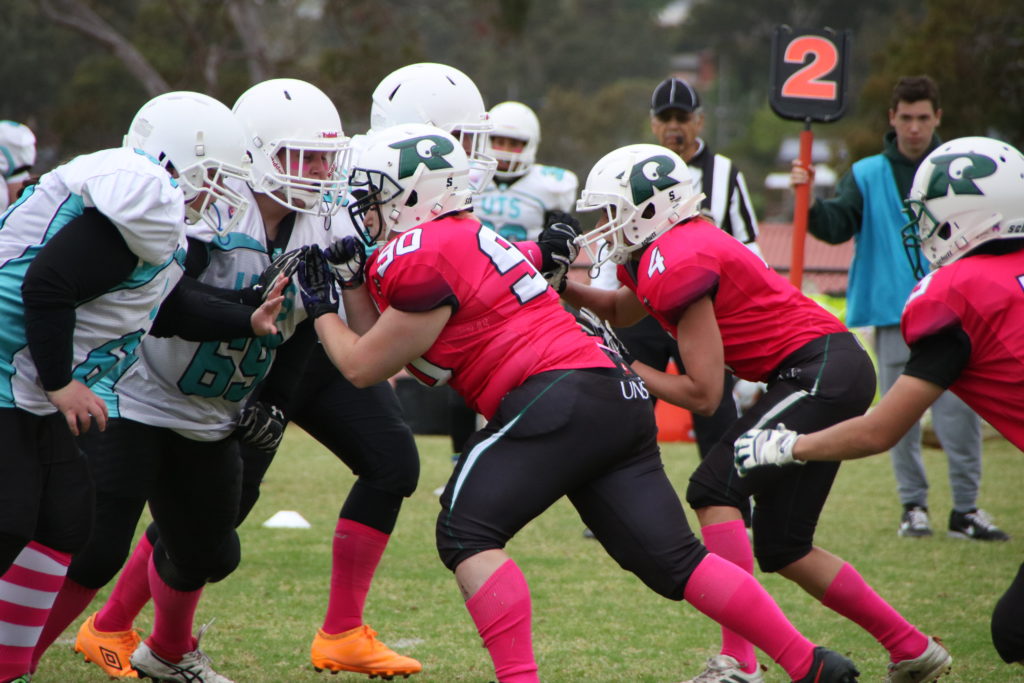 Our women kicked off against the 3rd placed Gators at 2pm and they were on fire!

Dressed in their stunning Pink Round Jerseys they made their mark quickly.  The defense held firm and the offense hit the mark with first half touchdowns to #34 Alia karma x 2 and #43 Renae Hahn with PAT’s to #80 Evie Lichaa and #34 Alia Karmali taking the lead by a dominant 22-0 at the half.

The 2nd half saw UTS score quickly taking the score to 22-6 before the ladies fired up again with touchdowns to #27 Emma Furnaux and #80 Evie Lichaa who both converted their own touchdowns.  The vibe on the sideline during this game was fantastic and it was great to see everyone in great spirit.  It was an awesome performance by our women and it gives them a 6-0 undefeated record for the 2017 season! FINAL SCORE – UNSW Raiders 38 def UTS Gators 12

Our men kicked off our third and final game of the day against first place UTS at 4pm.  The guys started well however UTS made their mark first with an early touchdown that had the men trailing 0-6.  A touchdown pass from Quarterback #3 Lukas Vojnar to #16 Chris 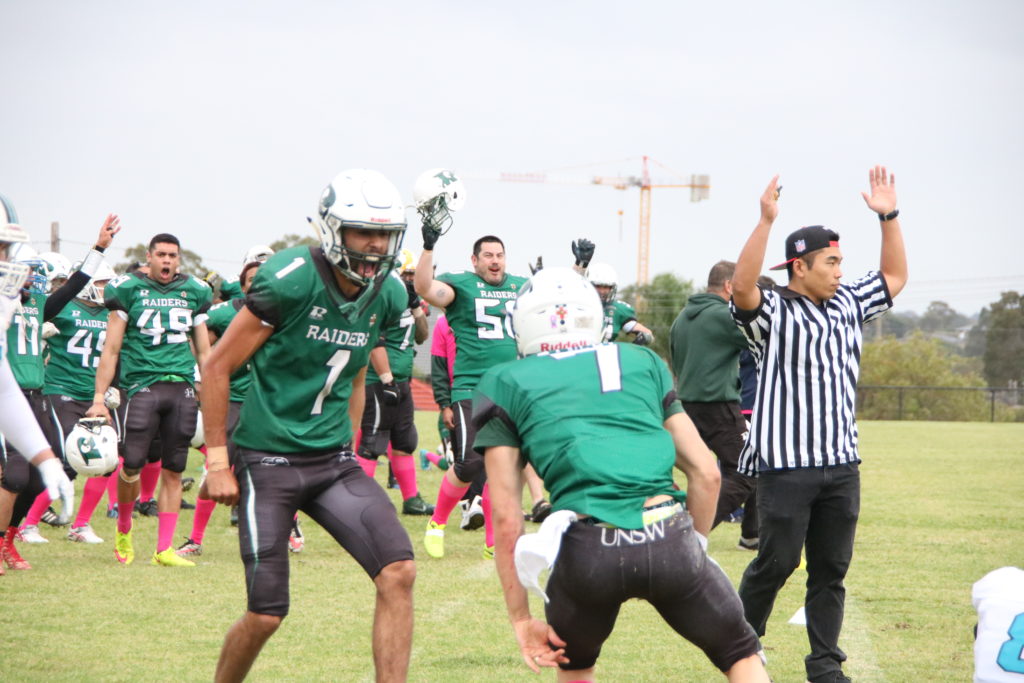 Ravlich tied up the score at 6 all before UTS picked up a fumbled PAT to take them to a 6-8 lead.

In the 2nd quarter a field goal by #33 Aaron McEvoy took the men to a one point lead of 9-8 before a touchdown by #7 Lamar Dansby took the guys to the half time break leading 15-8.

The 3rd quarter saw no change in the score and the defense did a great job to hold the Gators.  In the 4th, the offense finished off business with a fantastic drive that gave #3 Lukas Vojnar the touchdown.  The 1 point PAT was successful by  #33 Aaron McEvoy and the Raiders took the win against their undefeated opponent. The men played fantastically and it was great to see the teamwork and camaraderie on the sidelines!  FINAL SCORE – UNSW Raiders 22 def UTS Gators 8

The UNSW Raiders had a fantastic day at Neptune Park raising money for the McGrath Foundation and for the first time this season we are very proud to congratulate all of our teams for taking out the trifecta and defeating the UTS Gators in all three divisions!!

Our next games are on Saturday 21 October 2017 which will be Round 7 of the GNSW Season and will see our Men and Colts travel to Lidcombe Oval to face the West Sydney Pirates.  Our Women have a BYE week.