This past weekend was Round 7 of the GNSW Season.  Our men and colts travelled to Lidcombe Oval to face the West Sydney Pirates and our women’s team had a BYE week. 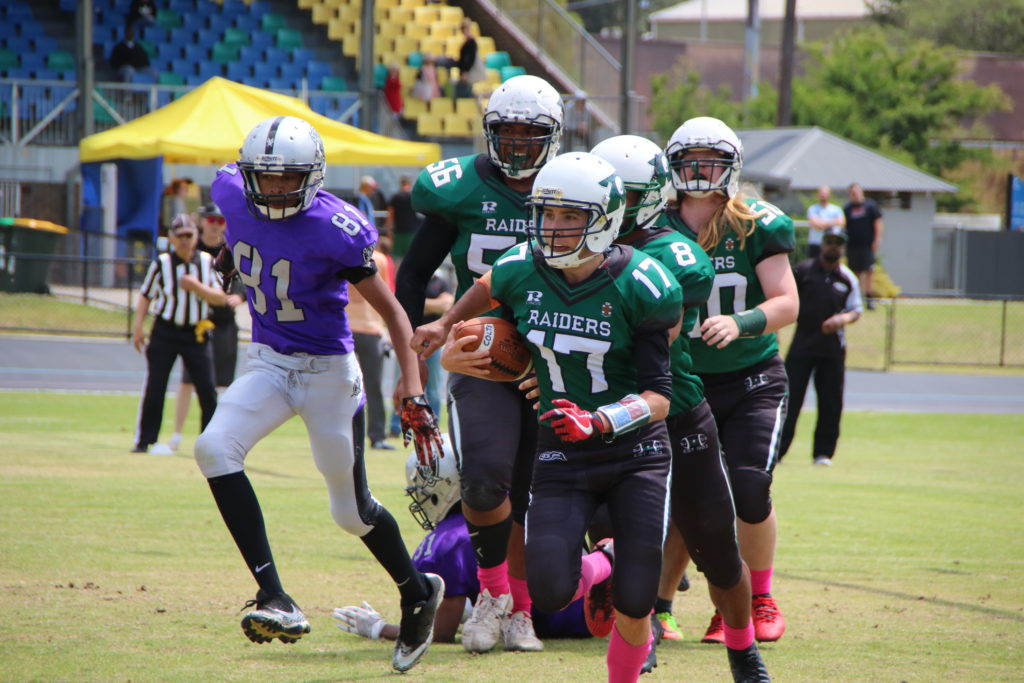 irst up for the weekend was our Colts who kicked off at 12pm against the 5th Ranked Pirates.  This was a very evenly matched game with no score until the final minutes of the 1st half giving the Pirates an 8-0 lead going into the break.

Our colts struck back early in the 2nd half with a touchdown to #17 Malechy Guthrie-Hunt followed by the 2 point conversion by #8 Evander Swann to take the score to 8-8.  The Raiders defence did a fantastic job to hold the Pirates scoreless in the 2nd half and the game ended in a draw.  Today’s draw gives the colts a 1W-2D-3L result for the season and still give the team an opportunity to make the finals.

Our men kicked off against the 1st place Pirates at 4pm. The game started with a safety to the Raiders giving the guys an early lead of 2-0. The defence did a great job to keep the Pirates scoreless in the 1st quarter.  The Raiders struck again in the 2nd quarter with a touchdown pass by QB #3 Lukas Vojnar to #25 Rustum Todd.  #33 Aaron McEvoy converted 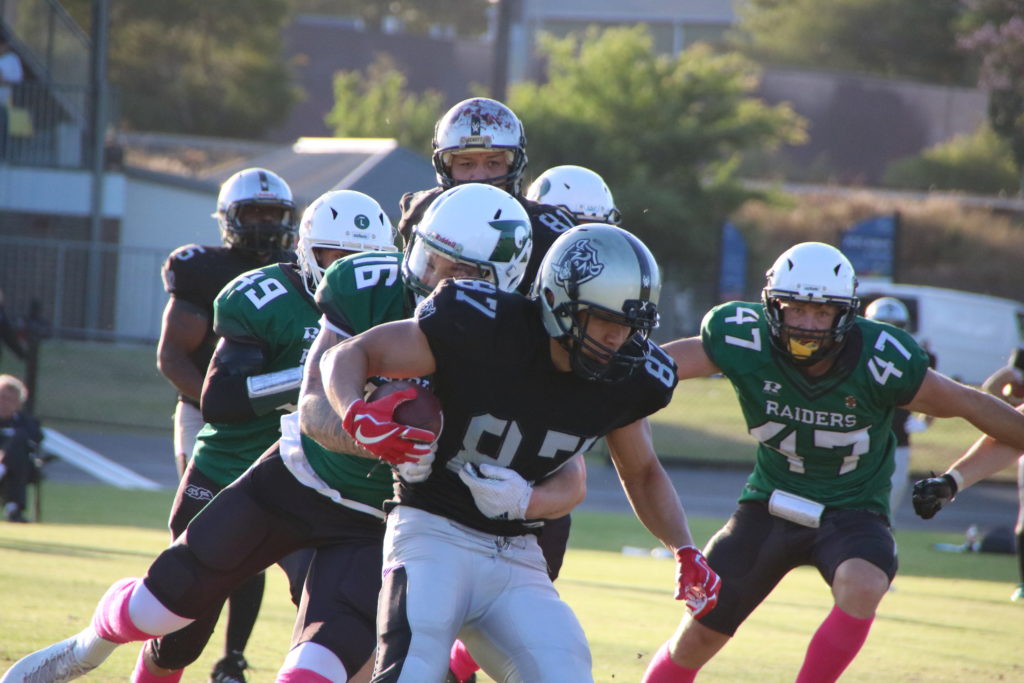 to give the Raiders a 9-0 lead until late in the half when then Pirates scored.  Going into the half time break the Raiders led the Pirates 9-7.

The 3rd quarter saw our men strike again with a massive touchdown pass by QB #3 Lukas Vojnar to #1 Max Nina.  Again, #33 Aaron McEvoy converted to give the Raiders a 16-7 lead before the Pirates answered and the score was 16-14.

The Raiders threatened the Pirates end zone again however had to settle for a field goal attempt which was blocked.  In the next series the defence held the Pirates, our offence took possession of the ball and drove it down to the Pirates 1 yard line.  It was an amazing final period with the Pirates making a crucial 4th down stop on their own goal-line followed by a 98 yard drive to score and take the lead. This was a great game to watch and was a heart stopper from start to finish!  The Raiders men played an awesome game and were very unfortunate to come up short. This result gives them a 3W-4L season record and sees them in 5th place on the ladder.  FINAL SCORE – West Sydney Pirates 22 def UNSW Raiders 16

GRIDIRON NSW ROUND 7 RESULTS ARE AS FOLLOWS:

If you would like to support the PINK MONTH and donate to the McGrath Foundation please go to: https://mcgrathfoundationportal.gofundraise.com.au/page/Gridiron

The men and colts will be travelling to Craik Park (Austral)  to face the Nepean Ducks and our women will travel to Zeims Park (Corrimal) to face Diamonds Gridiron.

The UNSW Raiders Schedule for Round 9 (4th November) is as follows:

WEEKLY HIGHLIGHTS –  Make sure you look out for our weekly highlights reel which will be posted on Facebook page on Tuesdays.