This past weekend, Saturday 4th November  2017, was Round 9 of the Gridiron NSW Season and after a week off all our teams back in action! The men and colts travelled to Austral to face the Nepean Ducks and the women made the trek to Wollongong to meet with Diamonds Gridiron. 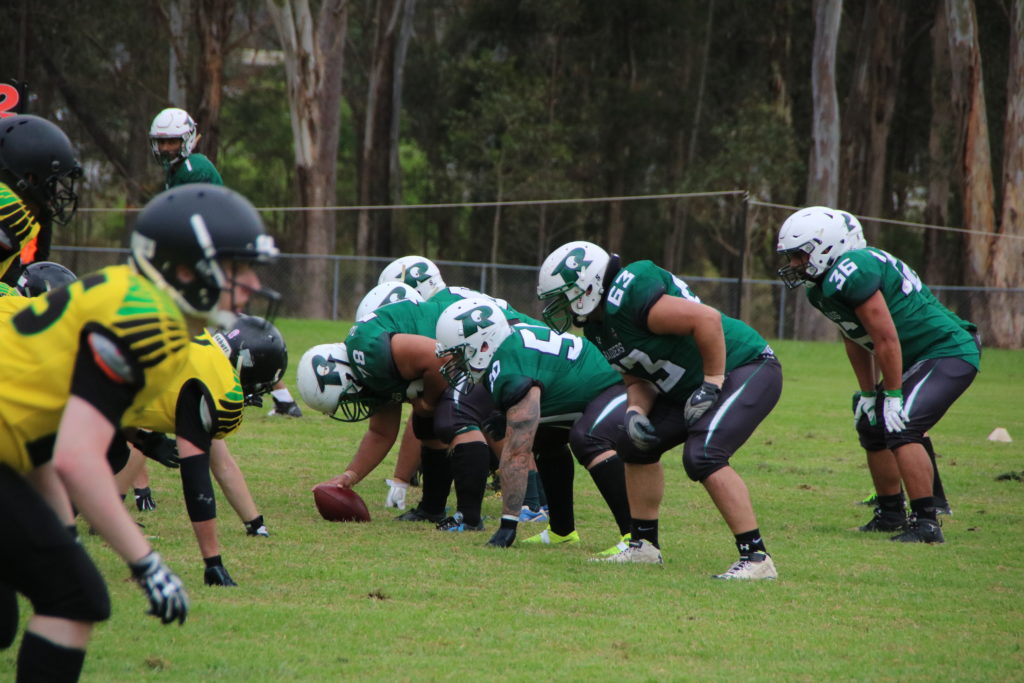 First up for the day was our Colts team who were due to kick off at 11am against the Ducks.  Unfortunately, the Ducks did not have enough numbers to field a team so the match was a WIN for the Raiders due to forfeit however the clubs decided that they would play a “friendly”.

The teams kicked off at 11am on a very wet and slippery Craik Park.  The Raiders quickly went to work with a rushing touchdown to #1 Paul Kitiona, and a touchdown pass by #17 Malechy Guthrie-Hunt to #88 Tarquin Harrison bringing the score up to 13-0.  Midway through the 1st half QB #17, Malechy Guthrie-Hunt, struck again and threw another touchdown pass, this time to #10 Corey Craig. With 2 successful PAT kicks to #12 Ethan Reid the colts went into the half time break leading 20-6.

The second half started with another quick touchdown to the Raiders by # 1 Paul Kitiona which saw them extend their lead to 26-6.  The Ducks scored twice more and closed the gap however it wasn’t enough.  The Raiders scored again with a touchdown pass by #17 Malechy Guthrie-Hunt to #88 Tarquin Harrison followed by a successful PAT by #12 Ethan Reid to hold on for the “win”.  Final Score in “Friendly” – UNSW Raiders Colts 32 def Nepean Ducks 22.  FINAL “RECORDED” SCORE – UNSW Raiders Colts 21 defeated the Nepean Ducks 0 (forfeit)

Down at Corrimal our women kicked off against the Diamonds Gridiron Team at 1pm.  The Raiders opened up with  a rushing touchdown to #43 Renae Hahn and a touchdown pass by #34 Alia Karmali  to #43 Renae Hahn.  The defence held strong keeping the Diamonds scoreless for the 1st half and the ladies went into the break leading 12-0.

The 2nd half started with a touchdown to the Diamonds taking the score to 12-6 before #80 Evette Lichaa scored the women’s 3rd touchdown and after a successful PAT to #78 Te’Shan Tofilau the score was 20-6.  The women finished strongly with a defensive touchdown to #10 Kirstie Bridge giving them the win.  This result gives our women a 7-0 undefeated season record. FINAL SCORE – UNSW Raiders Women 28 defeated Diamonds Gridiron

Our last team in action for the day were our men who kicked off against the Nepean Ducks at 3pm.  What a nail biter this was!  The game opened with a safety which was the only score of the 1st quarter and gave the Raiders an early 2-0 lead. 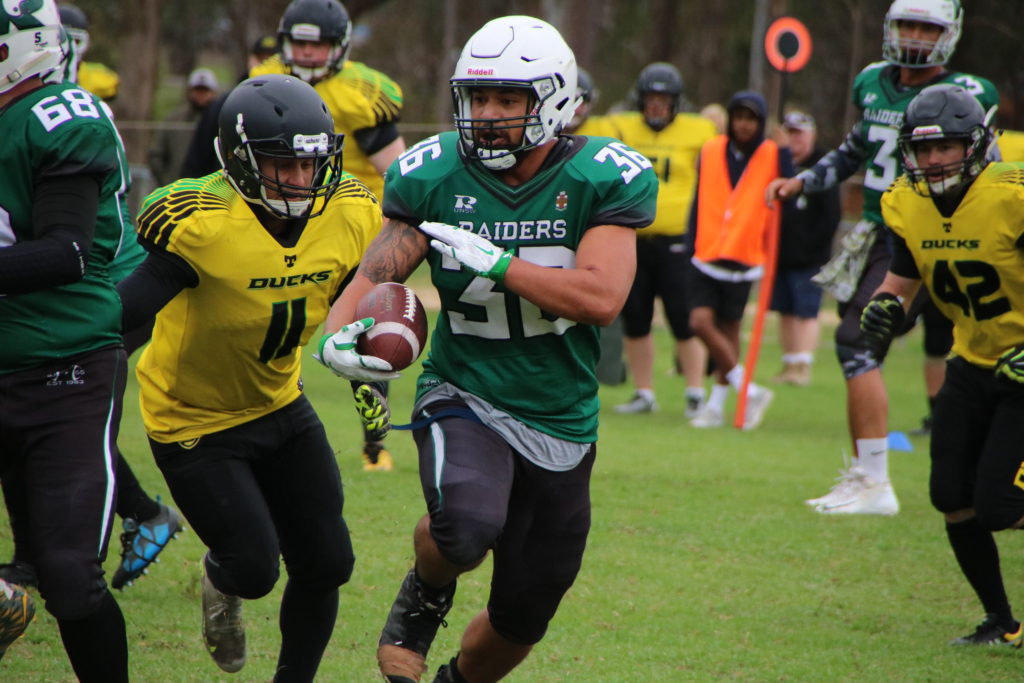 the 2nd quarter the Ducks defence held the Raiders scoreless while they ran in 2 touchdowns taking a 2-13 lead at the half time break. The 3rd quarter was a hard fought battle of the defences with neither team given an inch and the 4th quarter started in the same fashion.

The tide changed late in the 4th when the Raiders started to fight back with a touchdown pass by #3 Lukas Vojnar to #86 Joey Donaghy.  In the last 5 minutes of the game #3 Lukas Vojnar threw a pass to #36 Christian Gaitau to take the lead and a succesful PAT to #33 Aaron McEvoy finished off the game.

Today’s result gives the men a season record of 4-4 and puts them in 5th position on the ladder. FINAL SCORE – UNSW Raiders Men 15 defeated the Nepean Ducks 13

Results from around the league were as follows:

Our next games are on Saturday 11 November 2017 which will be Round 10 of the GNSW Season.  The Colts and Men will both travelling to Melwood Oval (Forestville) for their games.