This weekend was the Gridiron NSW Semi Finals. The UNSW Raiders Men went head to head in a Round 11 rematch against the West Sydney Pirates.  This was tipped to be the match of the round and it certainly didn’t disappoint – it was a nailbiter!

The whistle blew and both teams got down to business however by the end of the 1st quarter the game was still scoreless.  The Raiders were the first to strike early in the 2nd quarter with #36 Christian Gaitau taking the hand off from quarterback #3 Lukas Vojnar and the Raiders took the lead 6-0.  The Pirates leveled with a touchdown and converted for 2 taking over the lead 8-6.  With 19 seconds left in the 2nd quarter #3 Lukas Vojnar scored a rushing touchdown and the men finished the half leading the Pirates 13-8. 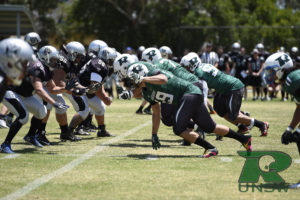 The 3rd quarter saw the Raiders expand their lead with a touchdown to #7 Lamar Dansby and by the end of the 3rd quarter they were still leading by 20-14.  In the 4th quarter quarterback #3 Lukas Vojnar struck again taking the men to a 26-14 lead.  Then the Pirates struck back with a touchdown taking the score to 26-22 and giving the Raiders a slim lead.  It was in the final minutes of the game when the Pirates struck again and they took over the lead 29-26. The men did us proud, they tried everything – they fought hard to regain the lead but, to quote Vince Lombardi, they just ran out of time!   FINAL SCORE – West Sydney Pirates 29 defeated the UNSW Raiders 26

Congratulation to the UNSW Raiders Men’s players and coaches on a fantastic season.  2016 is the first time in 11 years that the men have made it to the semi-finals.  The last time was in 2005 where they defeated the West Sydney Pirates before going on to play in the 2005 Div 1 Championship game.  The men have been on the rise over the past 2 seasons – last year finishing in 4th position on the ladder and making the playoffs but being eliminated in the Preliminary Final and this year finishing with a winning regular season of 8-2, making it through the Preliminary Final defeating the Northwestern Predators and playing in the Semi-Final against the West Sydney Pirates and only falling short of making the Waratah Bowl in the final minutes of the game.  I am sure it is safe to say that the teams in the GNSW league are on notice – the Raiders men are BACK!  Bring on 2017!

The UNSW Raiders Women have remained undefeated for a 2nd year in a row and will now have the opportunity to defend their 2015 title when they take on the Northwestern Phoenix this weekend. The Womens Opal Bowl will kick off at 2.00pm  this Saturday 3 December 2016 at Leichhardt Oval, Mary Street, Lilyfield.

LEAGUE LADDERS – Final season ladders have been updated and are to the right of this post.