The Wolverines did so in convincing fashion, including a 36 – 24 win against S.A Fire and a nail-biting 7 – 0 win in the Championship game vs the W.A Raiders.

Congratulations to the NSW Woleverines and special mention to the Raiders Jrs who were apart of the championship squad! 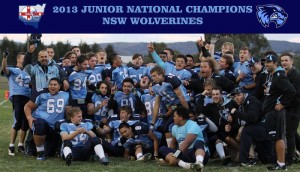